from the Gaze series presented in Munich, Berlin, Cologne, & Zittau Germany, NYC , San Francisco, & Miami TO VIEW MORE IMAGES FROM THE Gaze SERIES CLICK HERE Rene Lynch, The Gaze catalogue available with essays translated into German and English by Nicole Rudick of ARTFORUM magazine, NYC and German critic Cornelia Kleyboldt of Munich as well an artist's statement and images of the series. from the catalogue essay by Nicole Rudick...

The young women who peer out from Rene Lynch's "Gaze" paintings are meant to be looked at. The canvases are installed at eye level at regular intervals in a single gallery, setting a leisurely pace for inspection and allowing viewers to scrutinize the visages of girls who span the breadth of adolescence. These women, however, stare back.

Situated at the cusp of adulthood, the subjects of Lynch's series are charged with a double function. On the surface, they appear to correspond to our expectations: As newly sexual women, they are social objects to be desired and manipulated. (Lynch, in fact, appropriates fragments of her images from media such as fashion advertisements and women's magazines.) These superficial representations, however, quickly reveal themselves as descriptions of conscious persons. Each woman looks out from her canvas; this direct engagement with the viewer defies one-sided observation and indicates the formation of subjecthood—each can experience multiple attitudes, judgments, and aesthetic opinions. This is borne out by the variety of their facial expressions and poses: One girl angles her head to the side, lips slightly open; another tilts her chin upward and gazes out of the corners of her eyes; a third grins squarely out of the picture plane.

Yet the viewer's desire to decode these faces, to know something of the meanings behind their expressions, is complicated by the fundamental austerity of the works. In reading the paintings, one notices that they are not tied to a particular historical era: The women's clothing cannot be seen, and they wear no jewelry; their hairstyles likewise provide no indication of periodicity. On further examination, each painting appears "blank" in terms of context. Lynch provides no clues as to identity, background, or even precise emotional state. Though we can choose to interpret distrust, vulnerability, confidence, seduction, wistfulness, and so on, none of the faces offer to support these claims. In fact, two viewers may not see the same emotion in a single canvas. What we see in their expressions, then, relies as much on our own inclinations as it does on the artist's intention or power of suggestion.

In addition to the communication between subject and viewer, the rhythm of the installation—both the pauses between canvases and the accumulated effect of so many attentive eyes—implies a sense of movement within the paintings, as though each captures a passing instant. In Gaze (Furrow), a young girl's face is creased with a tense look of consternation or annoyance that seems incapable of lasting beyond a moment. In Gaze (Curl), a slip of hair seems only just to have fallen from its place tucked behind the young woman's ear. This carefully articulated idea of stilled action is doubly impressive for its expression only through facial features. Not only does Lynch bypass the bodily form (and thus also its loaded connotations) by omitting it from the space of her paintings, but in doing so she enforces a focused confrontation with women who seem capable of responding in kind. Rather than suggest that the paintings act as mirrors, reflecting the viewer's inner life, these works propose a mutual recognition between audience and subjects. Lynch wants to catch the viewer looking, substituting, if only for a moment, the environs of the gallery and the paintings therein for the viewer's social world. 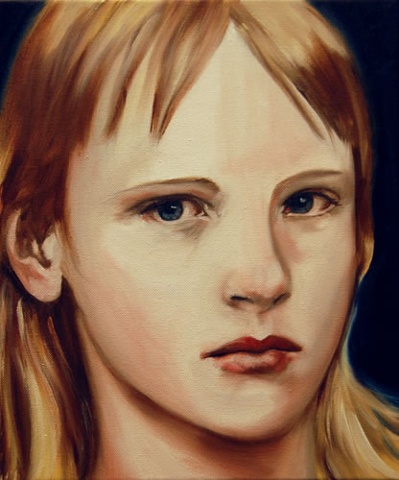